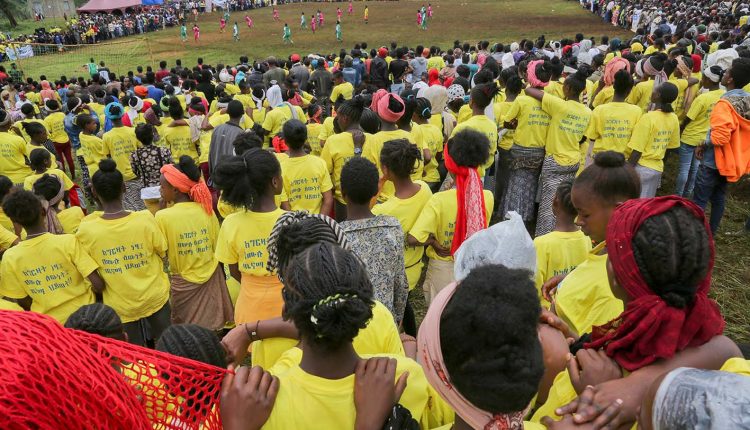 In 2005, KMG started scaling up its programs in SNNPRS, including Sidama Zone where, FGM is very widespread, bride abduction, early child marriage and forced marriage are common, and women have very low levels of education, and self-esteem.

The Sidama program was intensified since 2012, in collaboration with Plan International Ethiopia, in Bona; with 28 Kebeles (sub districts). Other donors such as SIDA, the EU, and Finland also joined the project.

In the past 20 years, we at KMG, listened and learned from the communities; using and promoting their own social capital, facilitated the change process with the communities. We witnessed remarkable changes and transformations in all our operational areas, with  Bona being our latest, shining example.

Every year, in Sidama, on their New Year’s Eve, communities go through a ‘Forgiveness’ process. In this annual event, each and every individual, starting from within the family, the neighborhoods, the community, and the work place, resolve their conflicts and misunderstandings and forgive each other. This event is termed ‘Fiche-Chamballala’, which KMG translates as ‘Renewal’, This phenomenon, which has persisted for over 2,000 years, is formally recognized by UNESCO as an ‘Intangible Cultural Heritage of Humanity’ (there are two such practices recognized in Ethiopia – the Fiche and Meskel, which is considered New Year for most the Southern nations). The Sidama belief is that a successful forgiveness/renewal process will ensure the New Year will start well.

Since KMG tries to eliminate harmful practices and replace them with beneficial ones, KMG took the term Fiche as ‘Renewal’, and created ‘Fiche units’ in each of the 28 Kebeles (sub districts),

These ‘Fiche units’ are made up of men and women, young and old, as well as religious leaders, including Fitch Chambellala elders. KMG, with Fiche groups defined their roles and responsibilities which included notably, the prevention & protection of children, girls and women from violence and abuse. The 28 Fiches were formally registered and legalized with the Zonal Justice Department as Community Based Organizations (CBOs).

The Fiche units were strengthened through training and capacity-building, supporting their initiatives, and promoting community resilience. A fund was established to enable access to justice for survivors of violence, particularly for those who could not afford it and for those who did not know how to gain access to support services.

Initially, the Fiche groups met every two weeks with other community members, 25 females, and 25 males, in facilitated discussion; in what is termed ‘Community Capacity Enhancement through Community Conversation’.

These discussions allowed everybody to have equal space and equal opportunities to express their ideas and opinions, without fear. These strengthened the groups’ understanding of the issues, allowing them to explore the problems/challenges within the communities and prioritize, which enabled each group to reach a consensus and to take action.

Through testimonials of set criteria, indicators were identified which allowed the group to judge progress: testimonials from individuals that they would not allow their daughters to be cut, that the men wanted to marry uncut girls, that the abuse of wives and children would be stopped, that daughters will be kept in school, that no girl would be married without her will, and that excess dowry, drinking and smoking would be prohibited.

Since early on, KMG discovered that when such groups reached a critical mass of people, attitudes and behavior would change; spontaneous discussions would start, leading to the creation of new community groups, and the identification of their own bylaws/sanctions against FGM, Gender Based Violence, including Domestic Violence, Child and Early Forced Marriage and Child abuse.

Since everyone in the groups represented the community as a whole, the strong feeling that emerged was that everybody who lives in that district must abide by these rules.

An extraordinary consequence of this is that in the last 3 years, there have been no cases reported of any incidence of FGM, nor child, early or forced marriages in the 28 Kebeles of Bona Woreda.

This led in 2016, to the communities throughout the district, drafting and agreeing on their own sanctions leading to Community Declaration, with Forty (40) Articles, outlawing gender–based violence. This was subsequently endorsed by the Bona Woreda Council and incorporated into government law. Importantly, this living document was handed over by the Sidama Zone, represented by Woman & Children’s Affairs Office, to the ‘Fitche Chambellala’ Elders, the gatekeepers of the Sidama culture, who agreed to ensure the future sustainability of everything that has been stated in the Declaration.

These are ground-breaking achievements.  Never before have communities, civil society, government and local authorities, development partners came together in such a way to tackle some of the most sensitive and complex social and gender issues of our time,

On August 30, 2018, all communities in Bona came together to support over 10,000 Uncut Girls,  and agreed to create an annual Uncut Girls’ Day where Freedom from all forms of Gender Based, discrimination & violence, including, FGM and Bodily Integrity will be celebrated, annually, This is a miracle!

What has KMG learned from all these successes? What the KMG experiences in Sidama and elsewhere have shown is that KMG’s values, principles and practices work. And that by applying such practices, harmful traditional customs, that have been part of Ethiopian culture and which have oppressed and violated girls and women’s’ Human Rights for millennia, can be eliminated. Definitively. Forever.

The key to this success is a deep–rooted, profound understanding of communities, and how they work, consistency and commitment to action.  And the key to achieving lasting, sustainable change is to ensure and link day-to-day life issues in livelihoods, education, health, environmental resilience with strategic underpinnings, and that communities are nurtured and become the drivers of the change process.